I am Dnyaneshwar Ramdas Yewatkar a worthy inheritor of the legacy of Gandhiji and Acharya Vinoba, carried forward the ‘Swarajya’ mission of father of our nation. The phenomenal impact of Gandhiji as young is in the heart and the spirit.

Learning a bitter lesson from impacts of alcohol on own family well-being, been running around tirelessly for the cause of de-addiction, since the tender age of 12. In Wardha alone, striven to get 40 villages completely free from addictions of all kinds. This has impacted at least 150 families in particular, saving them from clutches of alcoholism and domestic violence. Across 50 villages in Vidarbha, helped to organize women into a ‘Mahila Darubandi Mandal’ (Women association against addiction) in each village, a hugely empowering act for women and family welfare. Illegal sale of alcohol, consumption and domestic violence has completely vanished from these villages as the villagers would gratefully testify. Conducted rigorous de-addiction awareness camps reaching 1-2 lakhs people, including college/school students, villages, district police departments and urban slum communities. Hold honest, frank family meetings, with sensitivity and compassion for the addict and confrontation with the victim and suffering family. Spent countless personal hours counseling and ensuring complete and permanent de-addiction.

More holistic, approaches as community cleaning campaigns, installing commodes in each house (20 villages in Vidarbha completely furnished), mitigating local conflicts, spreading awareness of government schemes in villages and urban slums. A special resonance with the aspirations of children and has worked up-close alone, cut nails, bathed, arranged healthcare, books, sung to and taught urban slum children in Wardha. Rescued at least 50 children from child-labor on the verge of criminality and stealing, enrolling them in schools and ascertaining follow-up of their voluntary de-addiction resolves.

Developed a global commitment, going beyond the local community and country, in spirit of Gandhiji, by working as a foot soldier of peace during violence in Assam,  carried out a ‘Shanti Yatra’. Was also present during the communal violence in Muzaffarnagar and has participated extensively in national integration camps held across India, often in North Eastern states. Served earth-quake hit people in Nepal for one month.

I consider my-self just a ‘kaaryakarta’ and profusely acknowledge the help of Nashabandi Mandal, local voluntary organisations and MoSJ. Of late, received the prestigious state Govt. award of Maharashtra, ‘Mahatma Gandhi Service Award’ in July, 2014. Relentlessly, in recent days, has been passionately working to enforce the law prohibiting sale of tobacco near school premises and succeeded in impacting 1000 schools, from which at least records in 200 schools are readily available. Personally put up anti-tobacco/alcohol awareness boards in schools, colleges, religious places and community places. Held training programs for students, teachers and principal of colleges (e.g. Ambedkar College of Social Work, Kumbalkar College of Social Work) training students for social work, while  remaining a learner from concrete grass root experiences. 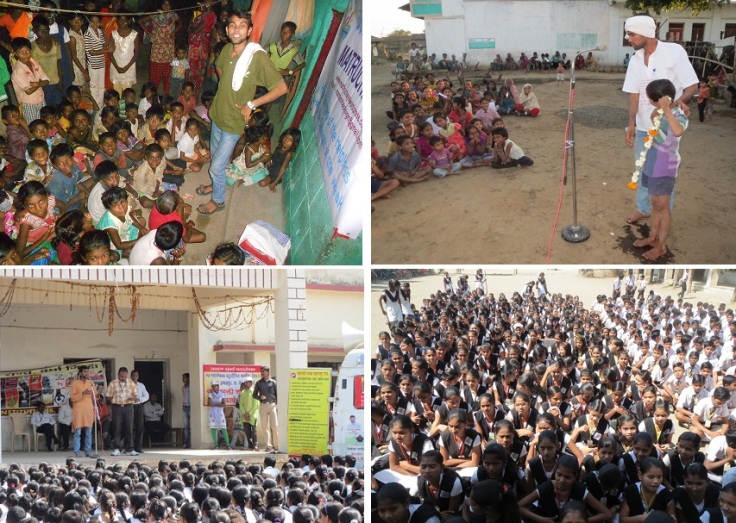 How you can lend your hand for the cause?

Travel guidance: Information about the places and routes ahead, suggestions and cautions if any, arranging discussions in institutes and local groups help in visa-approvals. Travel equipment, maintenance assistance and food & stay facilities.

Awareness: inform your friends about my tour and discuss on thoughts, ideas that are aimed to profess; personally, on social media and if possible local media.

Financial aid: everyone might not be able to personally involve and contact me for the cause, of those who want to help can support monetarily. Bank: State Bank of India.
Branch: Wardha, J.C.Kumarappa Marg.
IFSC code: SBIN0000500
Account number: 32012156094
Account holder: Mr. Dnyaneshwar Ramdasji Yewatkar